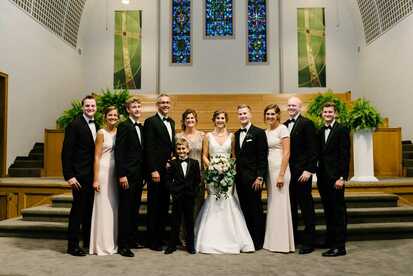 Smits Farm is located in Chicago Heights, just south of Chicago’s city limits and it’s one of our closest farms. In 1990, Carl and Deb, with the help of their five children (Kayla, Monica, Rachel, Andrew, and Matthew), started growing what the Farmers Market was lacking. Herbs! They grow a remarkable variety including mint, chives, lemon balm, cilantro, and basil. This proved to be a success. Since then, they have grown in size starting out with just one greenhouse to having several greenhouses on 125 acres. They have started to grow more produce like tomatoes, zucchini, sweet corn, peppers, squash, melons, and pumpkins.

Carl realized that he wanted to be a farmer when he was in university, studying to become a minister. After taking a soil science course as an elective, he learned how important it was to take care of soil. He remembers that his professor once said, “if you want to be a farmer, you have to build your soil.” This stuck with him through the years and he took it into his practices when he started farming. Carl also gained experience in his youth when he worked on his Grandfather’s farm.

Everything on Smits Farm is grown without the use of chemicals. He uses his own fertilizer that he makes from ground-up yard waste. This idea came from the new regulations in Illinois that would send all yard waste to landfills, instead of for composting. To avoid any contamination, Carl always tests the yard waste before it is used. He also reduces the amount of natural gas and oil used by heating the greenhouses with waste wood in the winter. Carl bought his farm from a conventional grower and he said that the first year transition was a little tricky. A nitrogen-deficiency in the soil left the crops looking yellow and fertility was low. The weeds were out of control from years of spraying, which created a population explosion. The fields needed a lot of TLC with cultivation, hand weeding, and adding organic materials in the soil. Carl explained that his choice was more of a logical decision rather than an ethical, health or environmental assessment. Carl believes that going back to the natural way of farming, without the use of chemicals and pesticides, guarantees that the soil will build up organic matter and gradually retain nutrients that were lost. Healthy soil means that plants will be healthier and resistant against any insects or disease. Carl said the more natural the farming is, the fewer problems the farmers will have.